What am I trying to do?

Provision Grafana Alert Rules and other alerting artifacts through the provisioning tools or APIs that I can script.

Why am I trying to do it?

We deploy Grafana to many different servers. To accomplish that, we deploy via “infrastructure-as-code,” and the option to manually deploy/tweak a configuration is simply not an option.

How am I trying to do it?

Here is the basic lifecycle I want to implement to deploy Grafana:

a.) define an alert rule in the UI - this increases the definition will be valid. I don’t want to have to write Alert Rules in raw JSON or YAML.
b.) export the alert rule - currently, the /api/v1/provisioning/alert-rules/ endpoint allows me to export the alert rule. The result is a JSON file representing a single alert rule that I can save as a JSON file and manage separately.
c.) provision Grafana in a template instance (an AMI in AWS-speak)- copy the JSON file into a provisioning/alerts dir. (I happen to use Ansible).
d.) deploy the instance - Incidentally, I use terraform to deploy the AMI into AWS.
e.) start Grafana at launch time - when the instance starts issuing systemctl start grafana-server.service.
f.) bonus: modify/tweak the deployed rule, then loop back to a.) Hey, why not? Grafana dashboards can easily be exported without saving to the database, so why not something similar related to alerting artifacts? (hint: I have had some success by manipulating the provenance table.)

What documentation have I used:

You can manage alert objects in Grafana by adding one or more YAML or JSON configuration files in the provisioning/alerting directory.

But the example disappoints on two points:

When I take the JSON generated from b. and provision it, …well, crickets. I guess that’s Grafana-speak for “you’re doing something very wrong.” Hrumpf. Probably that Rule vs. Rule Group issue.

I actually opened a GitHub Issue about this. The API is not consistent, nor is it completely documented. Basic features, like “List all the rules” are not provided.

My scripts were created to run against Grafana 8.x before the provisioning API. I had to scrape/fuzz/google level 11 to find out how to integrate with the API. Here are some of my notes:

Here’s what I did:

That worked perfect with v8, but with v9, when editing rules created like that, it causes my browser tab to lock completely and so bad the only fix is to close it. My plan is to retry with the provisioning API.

I’m hoping this process doesn’t cause the editing of the rules to lock the browser.

FWIW, you can view the API by checking the generated_base_* files pkg/services/ngalert/api/ directory.

Thanks for the feedback, @blhotsky. Good to know that I’m not the only one struggling with the current docs.

I’m beginning to think that provisioning-from-code is a use case that has not been fully thought through yet. At the very least, it seems like a patchwork of features that is not well-explained. For example, the inability to easily edit or export provisioned Alert Rules is particularly problematic for me. (I’ve had to resort to hacking the database to get that done.) Other features are missing for no apparent reason, ref, API Documentation Inconsistent and API features missing in 9.1.1 · Issue #54418 · grafana/grafana · GitHub

That browser lock up - oooof. I’ve not run into that…yet.

We’ve updated and improved the documents for API provisioning of alerts & for file-based provisioning (uses yaml).

The new documentation is available for both here. Please share your feedback and let us know if this is what you were looking for or if there are any other suggestions you have: 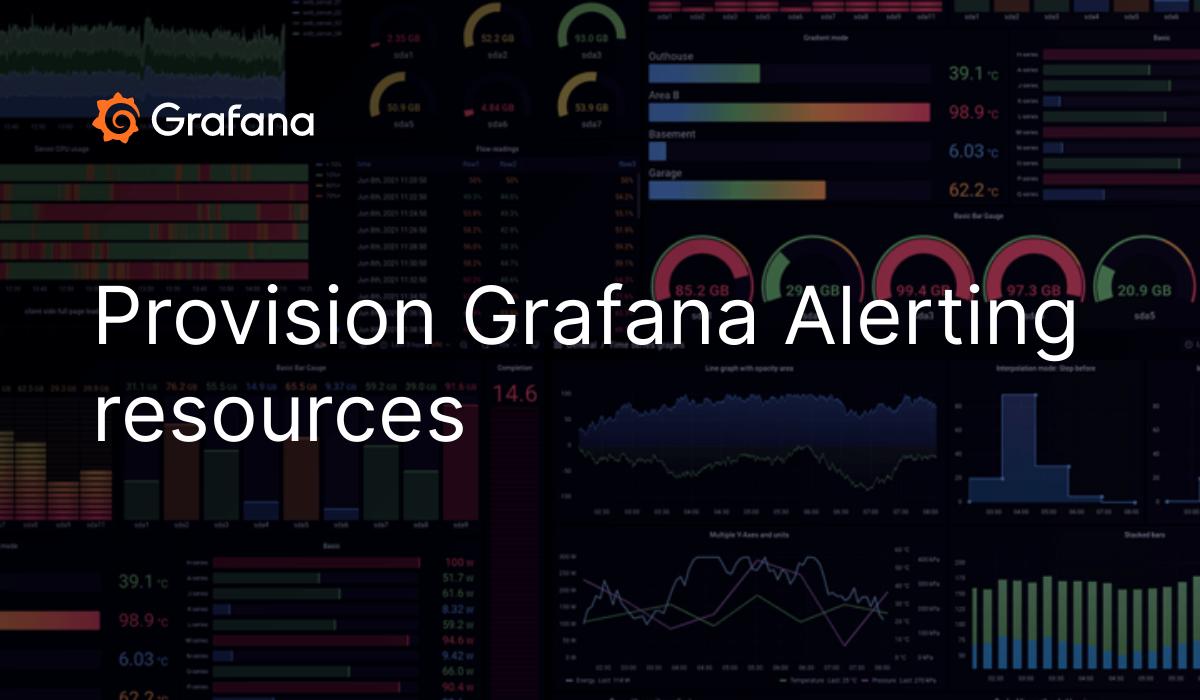 Hi @melori.arellano, thanks for the reply. That doc is an improvement, but I don’t see how it addresses what we discussed. I don’t think it solves the issue I raised.

I was pointing out that defining a valid alerting definition that we can deploy with the provisioning infrastructure (yaml or json) was very error-prone and not scalable. Trying to use the API is an alternative tool, but don’t address the underlying issue of the definition complexity.

Grafana Labs has gone to lengths to build a UI that we can use to define alerts. This would be quite useful if I were a cloud user and my primary interface was the UI. As a user that deploys only from code (read: source-code control), I’m surprised that there is no easy way to make the definitions available to the deployment infrastructure. For example, I suggested making them exportable so they could be provisioned. Or import-able so we could easily re-edit with the UI and then export/re-provision them. (Hint: both are features available in the dashboard toolset.).

Let me know if you would like to discuss this further.